After the War Auschwitz to Ambleside: Q & A with author Tom Palmer

Posted on August 7, 2020 by alibrarylady 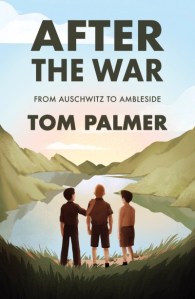 As soon as I read After the War by Tom Palmer I knew that it would be one of my top children’s books of the year. It was inspired by the three hundred child concentration camp survivors who came to the Lake District in the summer of 1945 for ‘recuperation’. The story is told through the eyes of a Polish boy named Yossi, who, with his two friends Leo and Mordecai, has survived the horrors of the camps to find himself in the beautiful surroundings of Lake Windermere where it is hoped they can begin to recover. An important story told with compassion and respect, it is immensely  moving and leaves you needing to sit quietly and think about its impact.

It must be daunting to take on the challenge of making the subject of the Holocaust appropriate and understandable for children but Tom Palmer has made it work. In addition to portraying the aftermath of life in the concentration camps he also provides the background to the boys’ lives before the war and this creates a sense of them as people who were part of a supportive community where tradition, religion and family were important. They become real people to the reader and not nameless victims. He also portrays hope for their futures and the way in which they may be able to thrive in a new country helped by the kindness and support of others. There is relevance here to many situations in which we find ourselves in the world today. Many days after I read it the story of those boys, and their families, has stayed with me. The book was published this week and you can read my full review here. I think those who read it will not forget it.

Barrington Stoke, the publishers of this beautiful book, offered me the opportunity to ask Tom Palmer some questions about After the War, its inspiration and the writing process and I am delighted to share his interesting and thoughtful replies here.

The subject matter of After the War is both important and challenging and you have successfully managed to convey this within a storyline that is appropriate and engaging for contemporary young readers. Did you know from the outset how you planned to approach the content or did the story evolve from your research?

First of all, thanks for saying that. That’s what I was trying to achieve, so I am glad you think it works okay.

The answer is I knew 100% that After the War had to be based on primary sources. I began with the audio recordings of the Windermere Boys – 300 children who came to the Lake District from the concentration camps in 1945 – on the Lake District Holocaust Project website. It had to start there. I was told by people who have worked in Holocaust education that you must be entirely faithful to the true events. There is no need to make anything up, no need to embellish, anyway. So I listened to hours of recordings and then read the books written about and by the Boys. Then it was just a decision as which of the true stories to work with, with the guidance of my editor at Barrington Stoke and the Lake District Holocaust Project. You can listen to the Boys’ interviews at http://ldhp.org.uk/?page_id=507.

Despite having spent many happy childhood holidays besides Lake Windermere and having family connections I knew nothing of the Windermere Boys. Why do you think they have only received attention in the last few years? How did you learn about them?

My wife heard about them on Radio 4’s Open Country (https://www.bbc.co.uk/programmes/m0000xrc). Then we checked out the From Auschwitz to Ambleside exhibition at Windermere Library, then I met Trevor Avery, who led the team that put the exhibition together. He has great relationships with the surviving Boys’ and their families. He joins the survivors in schools to pass the story on. He was crucial to the film The Windermere Children coming out earlier in 2020. But all this work has really only happened in the last 10 years.

Gradually I built up what I needed. I also travelled to Auschwitz, then Theresienstadt, the camp where the Boys were liberated from. On a lighter note, to reach the part of the shoreline where the Boys would have played and swum, I had to canoe down from Ambleside to reach that. And I also took part in an archaeological dig on the site in July 2019.

You consulted primary school children at one point when writing the book and shared the story with them. Did this result in you making any changes and if so what type of alterations did you think necessary?

Hugely. I took a late-ish draft of After the War to Grasmere Primary, one of the nearest primary schools to site. The main point they made was that they did not want to be over-distracted by the drama of the events or their emotional impact on the readers: they wanted the facts. They wanted to know what the children’s lives were like before the Holocaust, what happened to the children during the Holocaust and what happened after they came to England. I remember the look on their faces when they said all this to me. It will stay with me forever. Yes, we like the story, but we want to know the facts, to understand the why, the what, the how. So I went through the book and rewrote several sections to make sure I was being clear and not being manipulative.

This is your 50th book. What an achievement! In what ways do you think children’s publishing has changed since your first book? Do you think that your writing style has changed too?

I think children’s publishing is far more decentralised and therefore more child-friendly. A lot of that is down to libraries, booksellers and bloggers, including the likes of the Federation of Children’s Book Groups acting as a two-way conduit between publishers and readers.

Authors are much more in touch with the children’s book world (and mightily grateful to them) and their readers through these channels. Also, I think there is a flourishing of smaller publishers excelling. Look at Barrington Stoke winning the Carnegie with Lark. It feels more bottom-up then top-down.

I’m not sure that my style has changed. To be honest, I don’t know. It probably has. The big deal for me has been confidence. The more confident I have become the more I dare take on bigger subjects. I would never have dared writing from the point of view of soldiers in the trenches or Holocaust survivors at the beginning of my writing career. Now I do dare, so long as I have the expertise of others to guide me. But the main reason I think my recent books – Armistice Runner, D-Day Dog – have done pretty well is because of the quality of editing I get from Ailsa Bathgate.

In After the War and your previous books connected with WW1 and WW2 it is obvious that you have carried out an enormous amount of research. Have you always had an interest in history or has this developed alongside your writing?

To be honest – as I’ve already alluded to – I would never have dared write about history before. I thought you had to be a historian or something that I wasn’t to do so. Then – with the help of another writer and the fact the book was about footballer – I wrote Over the Line. Then I realised that – so long as you do your research as in-depth as you can – you draw the confidence from that. That and enjoying reading history fiction, notably Rosemary Sutcliff and Bernard Cornwell. Gradually I built up confidence.

There are loads of free resources relating to After the War at www.tompalmer.co.uk/after-the-war.

What type of book do you hope to write next and do you have an ideas or plans you can share with your eager readers?

I am writing a story about the Second World War Arctic Convoys with Barrington Stoke at the moment. It features HMS Belfast and the Imperial War Museum is giving me lots of help with that. That might be called At Sea and should be out in May 2021. As well as that I have been commissioned to write books 7 and 8 of the Roy of the Rovers series by Rebellion. Then there’s this other idea that I have, but I have to stop thinking about that for now and get on with the jobs I have been asked to do!

Thank you very much Tom for taking the time to provide such full, interesting and detailed replies to my questions. I have learned a great deal and have found following up the links you provided fascinating too.

After the War is a remarkable and rather special book and I would urge others to read it if you can. Sometimes books really do matter and I think that this one does.

6 Responses to After the War Auschwitz to Ambleside: Q & A with author Tom Palmer