Kirsty Applebaum’s follow up to her original and acclaimed debut, The Middler, is another perceptive and powerful story. A book that encourages the reader to question the true meaning of friendship and what makes us human. Highly recommended. 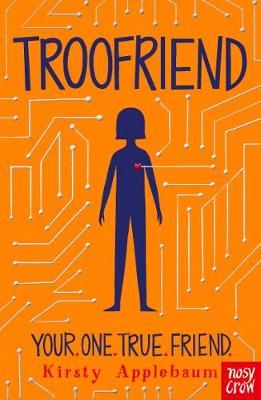 Sarah is unimpressed when instead of the dog she hoped for her busy parents buy her a brand new Jenson and Jenson TrooFriend 560 Mark IV to keep her company. How can a robot be a proper friend? When Ivy, as Sarah names her new companion, starts tidying her bedroom for her Sarah starts to see possible advantages and plans to impress her classmates with Ivy on Bring Your Tech to School Day. However, gradually and subtly the relationship between the android and Sarah changes with implications for everyone.

The narration by Ivy of the story has considerable impact on the reader. Initially there are moments of humour that are entertaining and amusing but gradually and subtly the voice of Ivy changes. The reader is therefore slightly ahead of Sarah in the recognition of this which adds to the tension and the emotional involvement. This is a book to which the cliche ‘I couldn’t put it down’ definitely applies. As Ivy slowly acquires human characteristics and  reactions you develop a sympathy and care for a robot character. This is cleverly done and, for me at least, unexpected.

Sarah also develops as the situation around her changes growing in empathy and understanding. Children will easily identify with Sarah’s difficulties at school. Eager to fit in and be accepted by others Sarah can sometimes be thoughtless and unkind and this raises moral questions that Kirsty Applebaum deals with deftly and in a manner that young readers will find engaging.  The growing unease of both Sarah’s parents and the wider community as the story of the Jenson and Jenson company’s actions is spread via the media is both interesting and relevant.

This is an intelligent story that lends itself to further discussion and thought. I anticipate that it will be used in schools to engage pupils in work on ethics and social studies. This is a fascinating and extremely enjoyable read for a wide audience. Just like The Middler before it I found this both enthralling and refreshingly different.

I should like to thank Nosy Crow Publishers and Clare Hall-Craggs very much for my review copy. The artwork for the stunning cover is by Sam Kalda. TrooFriend is out now and available to purchase online

If you think the concept for this story sounds far fetched you may find this article from the Independent interesting: How Robot Carers Could be the Future for Lonely Elderly People.

1 Response to TrooFriend by Kirsty Applebaum

A site to discuss and celebrate great children's books