Are you looking for books to encourage new readers? Barrington Stoke have published some wonderful books for younger readers recently and here are just two of them to give you a taste of what is available. 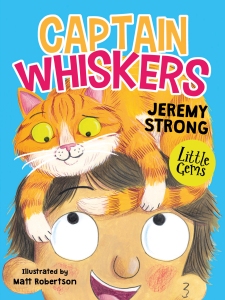 Everyone in Jackson’s class has a pet and Jackson would love a pet of his very own. He has a little brother but that’s not quite the same thing. Then one day Jackson meets a mysterious man when walking to school. The mysterious man has a pet cat named Mrs Wilson who takes a shine to Jackson and very soon Jackson gets not just one cat but one hundred and one cats!

Jeremy Strong has a gift for writing humour in books for children and for knowing what will appeal to young readers. This story is at times laugh out loud funny and at others a thoughtful look at how children can learn to overcome shyness. The author uses humour to lighten the fact that what young Jackson really needs is a friend. The text is accompanied by cheerful illustrations by Matt Robertson and children will love the cats. All the cats! There are cats of every type, colour and disposition wandering through the story and the endpapers. There is also a spot the difference puzzle featuring the mysterious man who readers will discover at the end of the story is hiding a rather special secret. A lovely book sure to put smiles on faces.

These two fairy tales with a twist told by one of our best loved authors featuring clever children getting the better of a grizzly bear and a grumpy king are sure to be a hit with new readers.  In the first of the stories a little girl named Masha is lost in the woods near her Grandma’s house when she is whisked away by a ‘massive muscly bear’  who wants her to cook and clean for him. Masha is not happy about this at all and comes up with a cunning plan involving cakes to trick the bear which she hopes will allow her to escape and return home to Grandma. The massive, muscly bear is sure he is too clever to be tricked, but he may be wrong!

The second story features a grumpy and rather bored king. Despite his courtiers doing their best to entertain him he wants more. He proclaims that the person who is able to tell him the biggest lie will win The Great Golden Belly-button. So the search begins across the kingdom for the biggest liar. The king is unimpressed by all the people flocking to see him to tell lies then a small girl called Peggy arrives at the palace. Surely she is not a liar!  The charming illustrations throughout by Ashley King add to the fun of both these stories plus puzzles to solve inside the front and back covers.

Both of these books are part of the fabulous Little Gems series from Barrington Stoke for young readers aged 5-8 and have a dyslexia-friendly layout, typeface and paperstock so that even more readers can enjoy them.

I would like to thank Kirstin Lamb and Barrington Stoke for providing my review copies. Both books are available now and can be purchased online by clicking on the titles above.

For more great titles from this publisher you may like to read my earlier reviews:  Barrington Stoke – Making Brilliant Stories Accessible to More Readers

1 Response to Brilliant books for New Readers from Barrington Stoke