Shakespeare for Every Day of the Year edited by Allie Esiri

Posted on September 23, 2019 by alibrarylady

This year National Poetry Day falls on 3rd October and with impeccable timing MacMillan Children’s Publishers have recently released a new anthology edited by Allie Esiri who has had great success with her previous poetry collections, A Poem for Every Night of the a Year and A Poem for Every Day of the Year. This time she has turned her attention to one of our greatest poets and playwrights, William Shakespeare. 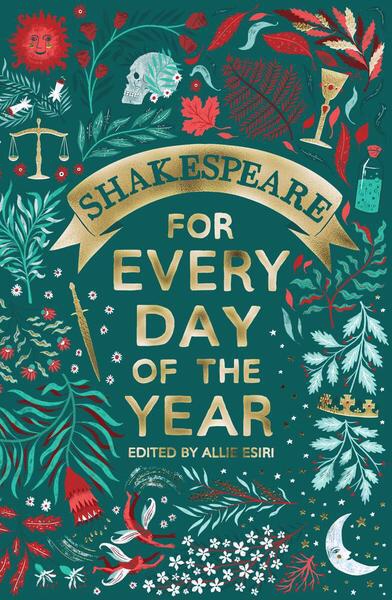 Each page of this sumptuously presented book contains an extract from Shakespeare’s work – a soliloquy, poem, quote or scene – appropriate to the date. These extracts are accompanied by an introductory paragraph by Esiri that provides a little background to the piece and to its historical context, plus information about Shakespeare’s sources. These introductions are entertaining and informative and allow the reader to discover a little more about the life and times of this famous poet. There are familiar and much loved plays and quotes included that one would expect but also less well known works.

Shakespeare’s works lend themselves to the calendar of the year as he frequently refers to the passage of time and the changing seasons. I have over the last couple of weeks browsed this book and found it a calming and thoughtful experience. Shakespeare for Every Day of the Year could be read as the title suggests as a daily journal but this book could also be enjoyed by dipping in as often and for as long as one felt inclined.

The picture of the cover that I have shown does not do justice to the gorgeous illustration by Zanna Goldhawk. This book would make a wonderful gift for both older children and adults to share, read aloud or pore over as a reference book. It would also be a valuable addition to bookshelves in school libraries and classrooms. A daily taste of Shakespeare’s work from this book would serve to whet the appetite of children and encourage them to investigate further. Allie Esiri has created a refreshing introduction to Shakespeare that should make his works accessible to a wider audience.

Of course for maximum impact Shakespeare’s works need to be performed and his words spoken by those who can do them justice. In addition to the hardback there is also an audiobook version performed by leading actors such as Sir Simon Russell Beale, Helen McCrory, and Damian Lewis.

Thank you very much to Clare Hall-Craggs and MacMillan Children’s Publishers for providing me with my free copy. It has taken pride of place on my bookshelves.