Five years ago the first Barnes Children’s Literature Festival took place with the aim to become an inspiration for book lovers everywhere. Since then it has grown into a two day event for families that is now the largest dedicated children’s literature festival in London. In 2017, the organisers launched their Education & Community Outreach Programme, specially curated, curriculum-linked sessions which are provided free of charge for primary schools. The authors appearing over these last few years read like a veritable Who’s Who of the children’s book world including Michael Rosen, Judith Kerr, Lauren Child, Michael Morpurgo and many more.

What is it about literature festivals and especially ones for children that make them so special? There is always a happy buzz about them and a general feeling of enthusiasm amongst the festival goers. This, I think is magnified at events for children. As I travelled by train to Barnes I read a tweet from Michael Rosen that summed it up perfectly:

“The thing about book festivals, children come and hear authors and ask authors questions and there are no tests or exams. The children just get to think and reflect and wonder and ponder – on their own or with friends or family.”

Throughout my visit I watched with pleasure as excited children listened and engaged with well known authors, asked thoughtful, articulate and interesting questions and discussed favourite books with other children and adults as they queued. It is a lovely touch by the organisers to have school children introduce the authors and illustrators at each event, emphasising that children truly are the heart of the weekend.

My first event was a talk by author and illustrator, Marcia Williams who I have long admired for her illustrated books such as Archie’s War, My Secret War Diary and Bravo, Mr William Shakespeare. At Barnes, Marcia introduced the audience to her first novel, Cloud Boy. This book combines two separate stories, one of present day best friends Harry and Angie told in diary format and the second of a young girl imprisoned in Changi prison in World War 2 told in letters written to her pet kitten left at home. The inspiration for Cloud Boy was initially Marcia’s visit to a quilt exhibition at the Victoria and Albert Museum where among the extravagant and beautiful quilts on show she saw a small coverlet made by children in Changi prison. The twenty children involved belonged to a guide group formed by one of the women prisoners comprising twenty girls aged 8 -16. When Marcia’s own grandson was going through a particularly difficult time aged only four she was struck by how important friendship is to young children and how they look after each other. The author wanted to show children how special this type of friendship is. These two moving elements combine in her new novel.

Marcia also introduced a very special guest to her audience, Olga Henderson who at just 10 years old was imprisoned in Changi Prison in appalling conditions alongside her mother. For almost half an hour this quietly spoken eighty seven year old woman had the children hanging on her every word as she told us about her experiences during WW2 and answered the children’s questions. It was a moving experience to hear her speak about her own life at the same age as many of the youngsters in the audience. The children will have gained a great deal from this experience, Olga’s story was a lesson in the value of optimism, hope and love. The session finished with a quiz which the the children entered into with enthusiasm and a book signing with both Marcia and Olga. I left the session with much to think about as I am sure everyone did.

A quick walk down the road took me to St Mary’s Church, the beautiful venue for my second event, a conversation between Bex Lindsay of Fun Kids Radio and Carnegie Award winning author, David Almond. David is probably best known for his award winning novel, Skellig. However he has created a fabulous range of titles for children and young people including my favourites of his, My Name is Mina, a prequel to Skellig and My Dad’s a Birdman. In addition he has collaborated with illustrators such as Levi Penfold for the stunning picture book The Dam and David McKean for the new graphic novel, Joe Quinn’s Poltergeist.

This hour of conversation passed far too quickly, I could have listened for ages. It was a wonderful, wide ranging discussion about writing, language and stories and full of inspiration for budding writers of all ages. David Almond’s books frequently use the language of his native north east and during his conversation he touched on the importance of this and of really engaging with the rhythm and sound of words when we read or write as this can be so beautiful.

As a child he grew up surrounded by aural story telling and loved myths and legends, enjoying books by authors such as Roger Lancelyn Green. He also occasionally pinched his sister’s Enid Blyton books! Libraries, as is so often the case, were important to the author and his reading material expanded to include John Wyndham and Ernest Hemmingway.

Bex asked David Almond about his books and about the specifics of the writing process. His answers were extremely thought provoking. He mentioned that writers have to be quite brave and said that any good book is created by something inside the writer, “writing is a physical, emotional thing that comes from your bones.”

There was, inevitably, a great deal of discussion about Skellig, a novel now used widely in schools. David said that he loves the stage play based on the book and is particularly happy to see how his book has touched readers and released something inside people. The wonderful thing about Skellig is to witness the creativity it has inspired in others. This is one of the reasons why books matter. All over the country teachers are working with children on art, drama and dance, all linked to this remarkable story.

When the children started asking questions David advised them that if they want to write they should read widely and when writing don’t write to try and impress anyone. He also gave them freedom to write the sequel to Skellig as he has no idea what happens next! The book itself leaves many unanswered questions. David also confessed that he finds starting a book easier than finishing it. He also warned the audience that all writers have doubts when writing and it’s important to learn to push aside the inner voice telling you that the story is no good.

Bex also asked David a quick fire round of questions from which we learned that he prefers books to a Kindle (of course!), writing about villains rather than heroes, Narnia to Hogwarts, doing school tours rather than bookshop visits as he loves talking to children and last but not least would choose cheese and onion rather than salt and vinegar crisps! His favourite word is hawthorn which made me smile as I love the hawthorn blossom at this time of year.

The queue to have books signed by David Almond afterwards was lengthy but so inspired were the children that all around me I could hear snippets of book related chatter. This book talk was enthusiastic, informed and frankly interesting for me to listen to. Youngsters discussed their favourite authors who alongside David himself included Robin Stevens, Philip Pullman, Matt Haig and Kate Di Camillo, a broad cross section showing a knowledge of current authors. One young girl commented that she “liked sad books best”, an interesting observation as David Almond had mentioned in his conversation that he believes that “children can manage all kinds of things.”

These two events that I attended were only a very brief taste of what was available over the weekend. There was an impressive range of activities on offer for families including an outdoor theatre trail linked to the wonder book The Lost Words by Jackie Morris and Robert McFarlane, model making with Aardman Animations, the Poetry Zone and much more besides.

The Barnes Children’s Literature Festival is a true celebration of the magic of children’s books conveying a feeling of creativity and inspiration but perhaps what makes it really special is that it makes children happy. I plan to return next year. 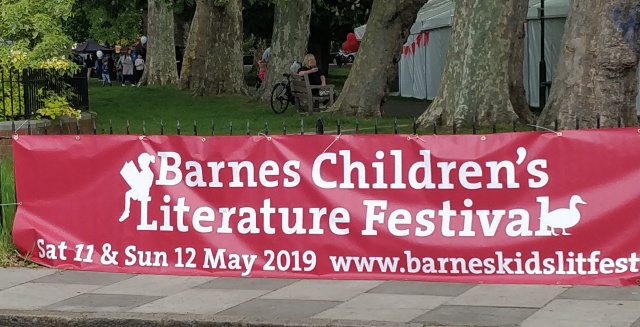