The Shadow of the Wind needs no introduction, an epic bestseller that has become so well known that tourists may now enjoy literary walks following the characters’ footsteps through the streets of Barcelona. The introduction to the book itself is alluring to lovers of literature.

“I still remember the day my father took me to the Cemetery of Forgotten Books.”

The idea of a building in which unwanted books are rescued and treasured is surely appealing to all bibliophiles. We accompany Daniel and his father as they enter this mysterious labyrinth where thousands of  discarded volumes fill the shelves. Prompted by his father, an antiquarian book seller, ten year old Daniel selects a book, or perhaps the book selects him, and this book, The Shadow of the Wind by Julian Carax, will dominate his life for many years as his life and the life of the mysterious author become entwined. Secrets and intrigue, love and loss, evil and death merge with voices from the past and dreams for the future in this story within a story. 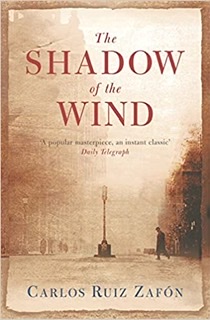 The pace of the storytelling and the dark Gothic setting encourage a slow immersive read of this book that blends together genres in a novel that flits across time periods and cities and brings together coming of age, sinister mystery and family tragedy in a saga that is enthralling. Daniel is an engaging protagonist and it was he that drew me on when the plot slowed a little in places. This is a book, I think, that requires time to read. I had intended reading this years ago but commitments then dissuaded me from persevering. The Coronavirus circumstances provided me with that time and I am glad that I included this neglected book in my 20 Books of Summer challenge. Rather like Daniel in the story I chose this lost book or perhaps it chose me. The writing is beautiful, the translation by Lucia Graves flows and this is a book that sucks you in rather than grips you with cliffhangers. The atmospheric setting of Barcelona in the time periods of the 1950s and 1930s in which the bulk of the story is set is described so vividly that I truly felt part of the place. In my imagination I walked with Daniel down dark, narrow streets through courtyards and crumbling mansions.

Any review of this book without giving plot spoilers is difficult. Daniel’s choice of book from the mysterious library engenders in him a fascination for the book itself and more importantly its author Julian Carax. Daniel’s attempts to discover the truth behind the life and death of the author expose him to great danger. He learns that a man named Lain Coubert is determined to track down all the copies of Julian Carax’s books and destroy them. That this man bears the name given to the devil in the Shadow of the Wind increases the fear that Daniel feels and his resolve to unearth the truth.  His own life, including first love and his family situation, mirrors in many ways the circumstances of the author’s life. By the time Daniel realises the links in their experiences it may be too late for him to put things right.

There are a multitude of characters involved in the story, a few are appealing but there are many who as a reader you either mistrust or dislike. The treatment of some of the female characters by powerful men is disturbing and yet there are women who display strength of character too. I particularly enjoyed the character of Daniel’s friend Fermin who, despite his rather excitable and flippant manner, is both knowledgable about the world of books and loyal and dependable when necessary. His behaviour in part a result of his own dreadful experiences during the Civil War.

Frequently throughout the story there are references to both angels and devils and allusions to the shadow of the title. Death is an ever present threat in this engrossing drama. Often as a reader we experience that sensation of becoming part of the lives of the characters we are reading about. Carlos Ruiz Zafon has written a book which creates the lasting impression of layers of different lives and different stories intertwining to create what is in effect an ode to the magical appeal of books.

This is the third book on my #20BooksofSummer2020 challenge organised by Cathy at 746 Books.  If you would like to see which other books I’m planning to read you can browse my list here. 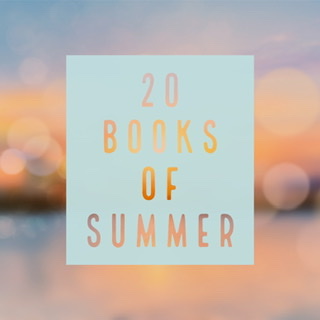 BookMurmuration
there and back again