Posted on February 4, 2020 by alibrarylady

As a primary school librarian I was always looking out for books that would hook those children that it was a little bit harder for me to reach. The children who found reading a little tricky or maybe just not much fun. One of the more positive aspects of children’s publishing over the last few years is the growth in the number of titles available that make this an easier job for librarians and teachers.

Today on the blog I am sharing three great books published this month that should engage a wide range of children and not only the avid bookworms in your life. 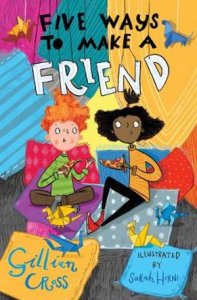 A lovely story about finding friendship, this title from Barrington Stoke deals with common anxieties that children face with kindness and humour. The exuberant illustrations accompanying the text complete the appeal of this touching book which I think will reassure young readers.

It is Ella’s first day at her new school and she is feeling a little worried. She is missing her old school and her friends but does not want to let her Dad know and worry him. Her first day proves to be worse than she had imagined. The other girls in her class don’t seem interested in her and at lunch break, like many new pupils, she goes to the library rather than be on her own in the playground. On the shelves she discovers a book called Five Ways to Make a Friend. Could this be the answer to her problem thinks Ella. Perhaps it will be but maybe not quite in the way that she imagined.

This is a gentle story told with humour and kindness. Although it covers the problems that children starting a new school may encounter it deals with them in positive manner that I think children will find comforting. Gillian Cross has written a story that will encourage children to find the confidence to be themselves. It also shows how true friendship may be hiding in plain sight, perhaps a useful lesson. The accompanying illustrations are jolly  and relatable for young readers. One other point worth mentioning is that there is no mention of Ella’s mother and this book may be useful if you looking for fiction depicting single parent families.

This is Groundhog Day for children and is both entertaining and very funny. The illustrations match the mood of the story perfectly and this is a book that should be a hit with even the most reluctant reader. I think it would be great read aloud too.

Anna Gain thinks that it is very important to be punctual. She is never late for anything. She is certainly never late for the school bus each morning. Then one morning something happens. Actually several somethings and poor Anna misses the school bus. She is horrified. But then she finds herself transported back in time and has the opportunity to put things right. However no matter how hard Anna tries things don’t work out and she misses the bus again. Over and over again she tries and fails. Will she ever catch the bus or is she being taught an important lesson?

I loved this and think it will appeal to young readers. Guy Bass has taken a scenario that is instantly recognisable to children and twisted it into an hilarious and chaotic adventure. However Anna learns a valuable lesson through her experience and realises that instead of treating time as something that can be beaten in fact every second is precious.

Both those books are published by Barrington Stoke and are presented in a style that is dyslexia friendly using a special typeface, extra line spacing and cream paper. However they would also be an excellent quick read for more confident readers.

The second in this new series finds Jasper discovering what life was like as a Viking. Through a series of letters written to an expert historian he and his friend Charlie Tanner discover fascinating facts while sharing lots of laughter along the way. A perfect introduction to history for young children.

The first book in this series Jasper: Space Dog linked to the anniversary of the first Moon landing and taught young readers about space. In this book Jasper thinks that he may be descended from the Vikings so his friend Charlie writes to the curator of the Bogna Viking Museum to find out if indeed Vikings had dogs and if so what they were like. The obliging curator, Astrid, advises the curious duo that yes, they did, and they were used for hunting bears and moose. So begins a series of exchanges in which Astrid answers questions, sorts out misunderstandings and teaches the boy and his dog all about the Vikings. There is a lot of information included in this little book and young readers will learn as they are entertained. We discover that Vikings were fond of bleaching their hair, were keen skiers and that wireless technology Bluetooth is named after a Viking leader. We even learn that fossilised Viking poo was discovered in York! How will children resist sharing this fact?

The illustrations have bags of appeal for children and this book is presented in a style that makes it readily accessible for emerging readers. This is a lovely way of blending facts and fiction that will engage and enthuse children. I would recommend this book for primary classrooms and school libraries.

Further books are planned and will cover Everest, Eco Living and more. A series to watch out for!

Did You Ever Stop To Think
My Book Corner