The Skylarks’ War by Hilary McKay

A wonderful story, characters you grow to love, a plot that carries you along with families as they grow from young children to adulthood set against the backdrop of a terrible war that affected so many, this is a book that I will remember for a very long time. 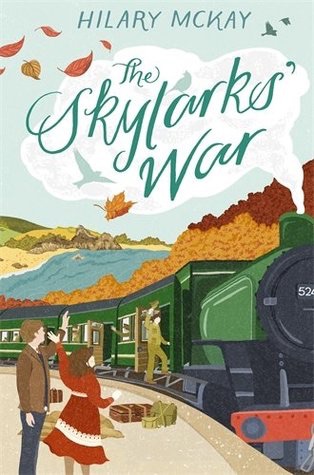 Set at the start of the twentieth century we follow the lives of  Clarry and her older brother Peter. Neglected by their widowed father who shows neither love nor any interest in his children, their lives are lifted by their summers in Cornwall. There they stay with their grandparents and spend time with their adored charismatic cousin, Rupert. But normal life resumes each September with boarding school for Peter and Rupert, and a boring life for Clarry at home with her absent father, as the shadow of a terrible war looms ever closer.

As a school librarian  I used to advise children who were having difficulty choosing a book to try the first page test. If they sat down with a selection of books they should then read the first page of each and then take home the one that they most wanted to turn the page and read on. Skylarks’ War has possibly the best first page I’ve read for years and I instantly wanted to find out more. Hilary McKay’s flowing and highly readable style conjures up images of both people and places beautifully. It is Clarry, whose full name, Clarissa so aptly means ”clear and bright”, who is the warm heart of this story. Despite the lack of love from her father she is steadfastly kind, thoughtful and cheery. This description makes her sound too good to be true but it never feels like that. Clarry is the sort of person the reader would love as a friend or sister and as the story progresses and she matures and develops it feels both real and engaging.

As a reader you immerse yourself in the childhood adventures of their sunny summers in the sad knowledge that world war and tragedy loom ever closer to the characters we have grown to care about. The departure of the much loved Rupert to the front affects everyone in his circle including Clarry, Peter and their friends Simon and Vanessa. The contrast between the childhood adventures and Rupert’s life in the trenches is dramatic and shocking and Hilary McKay does not shy away from descriptions of the effects of war on those involved. Clarry, still a child when Rupert departs, experiences a gradual realisation of the impact of war on both those fighting and those at home and this is portrayed with compassion allowing young readers to learn with her. All of the young people in the story are deeply affected by the war to varying degrees but by following them to adulthood we see the existence of hope despite the heartbreak.

Another thoughtful aspect of the story is the way in which Clarry is gradually offered both an education and encouragement to embrace the possibility of a future other than that expected by her father. The links to the suffrage movement at the time and the impact of the war on the role of women is deftly included in the plot in a natural manner. There are also moments of wry humour between Clarry and the wonderful Mrs. Morgan.

Hilary McKay has created a story and characters that will, I think, stand the test of time. It is rare nowadays for children’s books to deal with such a long time span and to allow characters to grow up but this is done so beautifully I believe readers will appreciate the chance to learn and grow with Clarry, her brother and their friends.

I love this book, a beautifully told story of friendship, love, loyalty, heartbreak and hope this is now a contender for my favourite children’s book of the year. Skylarks’ War has  the feel of a classic family saga and yet it also conveys thoughts and dreams that today’s young readers will both engage with and learn from. Gorgeous and highly recommended.

4 Responses to The Skylarks’ War by Hilary McKay

A site to discuss and celebrate great children's books